» About Us » Fishing in Sydney » Snapper Fishing Sydney 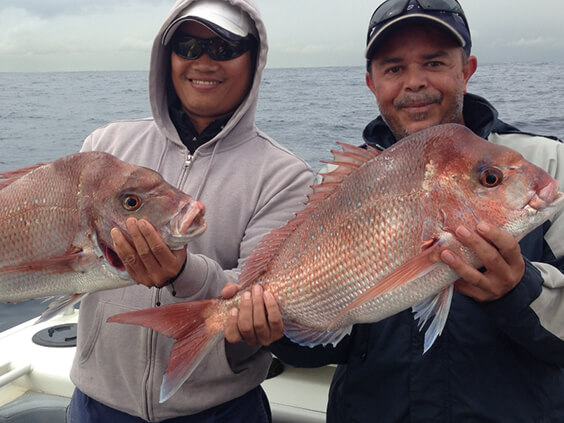 Pagrus Auratus, the scientific name for Snapper found in Australian waters. If your a regular fisherman or even an enthusiast that loves to fish in their spare time then no doubt you have had a goal to catch a huge snapper.

Snappers vary in size but are generally less than 3kgs with occasional monster bigger then 5kg. We have has seen first hand the smiles on our guests faces as they have had the opportunity to real in Snapper weighing over 10kgs, the thrill and excitement of catching such a prized fish is something you will never forget.

Why is snapper fishing in Sydney so popular?

Snapper fishing in Sydney is famous all over the world because of our amazing marine qualities along the coast of Sydney. Whilst there are locations where you can catch snapper from the shore, most of our successful and larger catches come from our deep sea fishing charter service in the deeper waters along the Sydney coast line.

When is the best time to catch Snapper?

The most ideal time to target snapper is between late spring and early summer. (October and December) This is due to the shift in seasons. Larger schools of snapper move closer in shore, into channels and harbours for more balanced water temperatures.

During this migration snapper become more hungry and aggressive, feeding on shellfish and worm beds.

What bait is best used to catch snapper?

The great thing with snapper is their really not fussy eaters. They're opportunistic eaters with fresh and soft baits both very effective with snapper.

When rigging soft baits ensure you leave room to move as this will make a big difference. Snapper tends to strike on the drop of the seabed so lightly jigging every so often is also beneficial.

During migration periods, looking for channels and areas where snapper are likely to cross. They prefer deep water so channels and inlets are often likely places you will find schools of snapper. Using fish finder technology the Sealord Fishing Vessel is able to identify areas of activity to increase the likely hood of catching a Snapper.