» About Us » Fishing in Sydney » Catching Marlin in Sydney 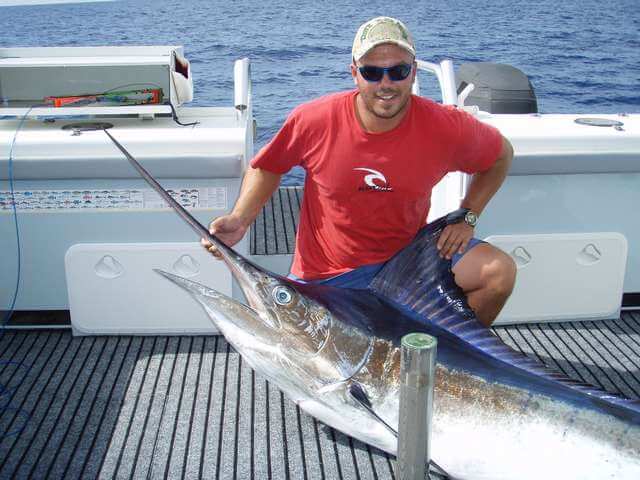 From late December to June the warm waters from the east coast begin rushing past Sydney, carrying with it scores of prime baitfish. This is when the various Marlin begin to arrive. There is the Stripe Marlin, Black Marlin and the almighty Blue Marlin.

During this period of heightened activity we also see huge Dolphin fish (Mahi mahi) along with Wahoo and other popular species of fish.

Sydney provides amazing conditions for game fishing almost all year round, with countless varieties of game fish striking at various depths from approximately 140 meters to over 3000 meters. During the right conditions you can find incredibly large Marlin will come within 10 nautical miles of Sydney Heads.

Sealord Charters is one of Sydney’s finest game fishing vessels, equipped to handle the biggest catches and fishing adventures. Your skipper and host Dean Popovic has over 20 years chartering these waters and will be sure to find you some amazing activity in Sydney’s vast and incredibly versatile waters.

Blue Marlin are amongst some of the biggest game fish with larger species reaching 14 feet in length and weighing almost 2000 pounds. The average usually reaches 11 feet, weighing in between 200 and 400 pounds. The average lifespan of a female blue marlin is about 27 years, whilst the males live to approximately 18 years in the wild. Blue Marlin a a migratory species as the move from location to another to follow warmer water temperatures.

When it comes to hunting the Blue Marlin relies heavily on its eye site therefore hunts during the day. Incredibly fast they can reach speeds of 60 mph. A majestic fish that prefers tropical waters, they swim close to the surface of the water and will dive to great depths in search for food. Some of the biggest threats to the Blue Marlin fish is actually boat traffic and accidental collision, closely followed by overfishing. The blue marlin fish is not an endangered species of fish and makes for an exciting and fun fishing experience.